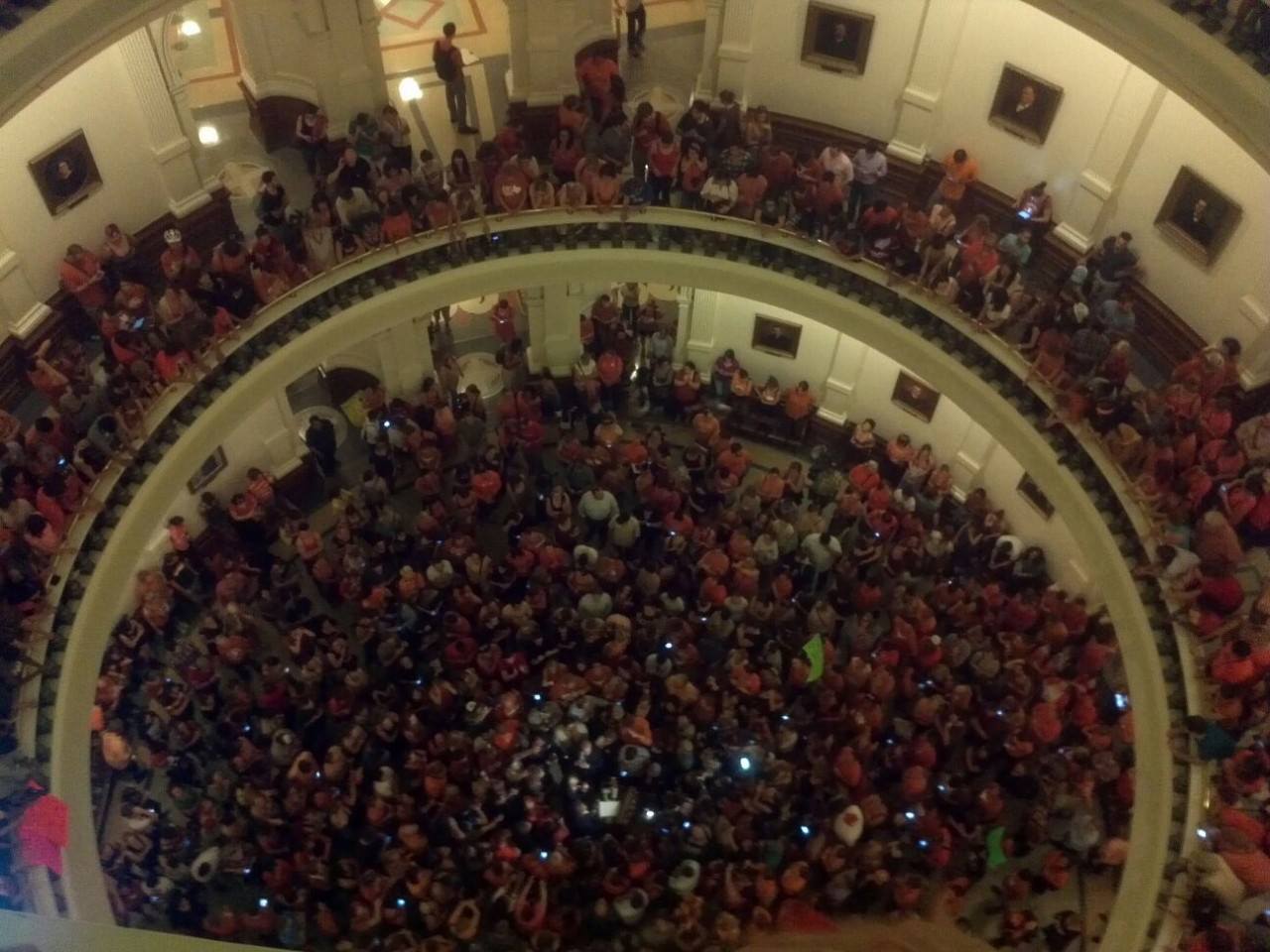 Yesterday, June 25th, Texas State Senator Wendy Davis filibustered against Senate Bill 5: The ambulatory regulation bill (which also would have made it illegal to have an abortion after 20 weeks, among other regulations). And I was there.

Growing up in a family who lived under the poverty line, I have seen struggle, and I have held close to my faith to get me through times that I didn’t understand. I was a devout Catholic growing up, wanting to be a nun, and sometimes crying to myself when I missed church. I felt it, and I believed it. I hardly missed a single mass until college, when I felt unsafe and uncomfortable in my local church- but that’s a story for another time.

I still consider myself to be Catholic, because it is not something that I can easily detach from. My spirituality will never leave me, but what has and is still in the process of leaving is my faith in the Catholic community and hierarchy. For several reasons, I have decided to open myself up to different ideologies, leaving myself vulnerable to the possibility that I am sometimes ignorant.

I feel the need to preface my experience at the filibuster with my experiences with Catholicism, because with my engagement in different ideology, I have learned things I would have never been open to as the person I was before. I was pro life in high school, the kind of pro life that didn’t even know how to take the other side of the debate in debate class. The kind of pro life that was blind to the experiences of so many women because I couldn’t relinquish the idea- “what if my mom had an abortion”. That was the way I was taught to look at abortion. If someone was pro choice, that means they would be happy if I weren’t born. It seems ludicrous to me now that I have had open conversations with people about abortion and let go of what I thought I knew.

Abortion regulation is a big issue right now. Since Roe v Wade, people in this country have tried to limit access to abortion and shame women who go through the ordeal of making that choice. These people truly believe that the fetus, embryo, or zygote are separate from the mother and complete human beings. These people might also truly believe that it is the responsibility of the woman to have a child if she was promiscuous enough to have sex in the first place, leading the argument that if you are going to have sex, you had better live with the consequences. Although this argument might suggest that the father might also have to live with the consequences, there are so many ways out for the man (for instance, he could just call her promiscuous and say it wasn’t his). There are also so many instances in which a woman might not feel comfortable bringing a child into the world, many of which I don’t think politicians (or middle class, able bodied, white, heterosexual, cis-gendered people) can comprehend. This insight more effectively comes from lived experience, but can be supplemented by compelling testimony.

And that’s my point, the point many people have, and only one of many points of the pro choice argument. You cannot possibly conceive of the situation of the woman. But that’s not really what I wanted to talk about. I want to talk about my incredible experience last night.

A few days ago I had read about the vintage dress protests from last Thursday.

I thought the idea was creative and inspiring and I was missing the feeling of being active in the community, fighting for things I care about. Yesterday, I went to a feminist book store and asked the woman at the register if she new any activists in the community that I could get in touch with. She asked me why I wasn’t at the Capitol and suggested I leave right then to be there. So, I did.

When I arrived I saw orange shirts everywhere. If I didn’t know any better, I would have thought there was some sports game happening (I think UTA is orange?). People were wearing orange in solidarity with Wendy Davis fighting for women’s rights. Walking into the Capitol, it didn’t take long to find someone with an orange shirt and ask where to go. I went up to the third floor where there was a relatively short line to get into the gallery to see Sen. Davis speak. Planned Parenthood was there going through the line telling people the rules of the courtroom- not to eat or drink, yell, hiss, or boo (I thought the hissing part was hilarious, but it did happen later on). When I sat down in the gallery, I saw the attentive faces of the men and women in orange around me. I heard Sen. Davis tell the stories of so many women who fear the lack of access this bill would provide. I heard her conviction, her perseverance, and her unwavering composure. What I saw that afternoon was a woman who wasn’t going to give up, and I felt moved and inspired by her dedication to women. Unlike Sen. Davis, when I got hungry, I was able to leave.

When I came back several hours later at around 7:30 or 8, the crowd had grown immensely. We waited in line to get into the gallery for about a half hour, listening to the knowledge of the women around us. I heard about the side of Texas that desires and demands rights for women, the side which is rarely portrayed in the media. Eventually, my sister and I realized that we would not be entering the gallery because no one was going to give up their spot in that gallery, not that night. So, we moved on to one of the basement levels to eat some of the food that had been donated from around the country to the activists, then we made our way to the auditorium.

The auditorium was packed, people were sitting on the stage, on the floors, in the aisles, all to watch and listen to the glorious Wendy Davis speak. My sister and I were sitting on the floor behind an elderly woman, who we later found out was a prominent activist in the community. About 30 minutes after we had arrived to the auditorium, we had realized that this woman was not well and needed medical attention. The people in the room cleared the aisles, and called a medic. As it turns out, she was having a stroke right around the time that the third infraction was called on Sen. Davis. She was taken to a nearby hospital, and the last I heard of the situation was that they were running tests and she was being taken care of.

After the woman was taken to the hospital, the activists in the auditorium turned the attention back to the filibuster. We lost the sound connection and were all desperately trying to figure out what happened. People were checking twitter and relaying information to the auditorium. When we got sound connection back, we saw that the President of the State Senate had temporarily stepped down, and another State Senator was running the show. The new State Senator was clearly having problems keeping track of what was happening because of the numerous parliamentary inquiries. And the parliamentary inquiries were amazing. After Wendy’s fight was ripped from her, the other democrats stepped in and demanded explanations. They ran the clock, they fought when unjust calls were made, and they barely made it. The State Senator, David Dewhurst, who was acting as the President, refused to consider the parliamentary inquiries which asked him to look over the transcripts to ensure that he was doing his job correctly. He began calling for votes. The first two, I believe, had to do with tabling the bill and whether or not Sen. Davis had actually made the last infraction of germainness. Everyone knew what was coming.

Senator Van de Putte called for the meeting to be adjurned before the last vote but Lt. Gov. Dewhurst did not recognize her. She parliamentary inquiried, “At what point must a female Senator raise her hand or her voice to be recognized over the male colleagues in the room?”. This question made the building erupt with cheer. EVERYONE was cheering and screaming. She had made her point so eloquently, when he continued to disregard her. The cheering was impenetrable, and no one could stop it. It was heard in the halls, on every level, in the Senate Chamber, and on video. The people of Texas had enough. Then, Lt. Gov. Dewhurst said the magic words, which went along the lines of We cannot continue to vote until the gallery quiets down. It was as if he knew what he was doing. The cheering became louder. They tried to clear the gallery, but people would not leave and people would not quiet down.

For nearly 15 minutes, the cheers continued. All the way until (and past) midnight. The people felt they were being silenced and they were not having that. It was so loud, and tensions were high. At midnight, we saw that they had not voted. We saw the confusion on the floor as they scrambled to figure out what to do. And just after, we saw them vote. It was after midnight and it was too late.

State troopers were there in moderately high volume. When they began arresting people, the activists in the auditorium burst out of their seats and ran upstairs (or at least, I did). I sat in a mob of people outside the senate chambers chanting: “We will not go back!”, “Let them go!”, “The people, united, will never be defeated!” We chanted for nearly and hour (or perhaps over? my phone died at this point). Then democratic Senators came out to address the crowd. It was so loud, and there were so many people that I have no idea what they said. With every cheer, we wondered if the bill had died. It wasn’t until around 3am that it was announced via Cecile Richards that the bill was dead. People cheered, hugged, cried, and sang. It was an incredible experience.

The personal is political.