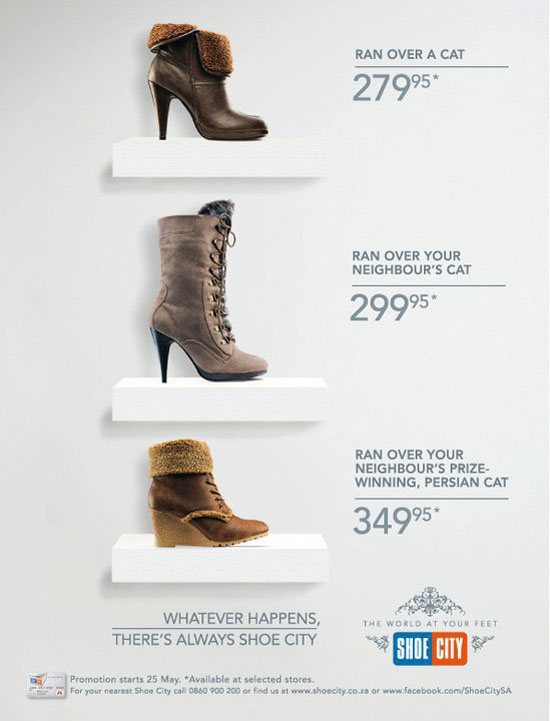 This ad, which ran in YOU magazine for shoe stores located throughout South Africa has been pulled. YOU magazine editor wrote, “To our readers: thank you for taking the time to show your support against the abuse of animals.”

What is not clearly voiced in the retraction of this ad is that this act is done to appease men’s sexual fetish and is most often accomplished by someone who is being paid to satisfy this horrific fetish some men have.
Please consider writing to Ms. Hamman. (Click here)
Below is a sample letter you can use or pull from for your letter:
Dear Ms. Hamman, Shoe City Marketing Director; Thank you for suspending your ad campaign and for finacially supporting Animal Anti-Cruelty groups. We are writing to ask you to consider also sending money to support groups that help women get out of prostitution. What remains to be addressed is the fact that many women and girls don’t carry out this act willingly. A young street prostitute describes her “job” to Diane Sawyer in a special entitled, “Prostitution in America.” She shares her self-loathing for doing what johns ask her to do, like killing small animals.

Those who find this sort of advertisement humorous must be ignorant of who profits from the sex industry and who are victims of it. Please consider the women and girls who are being forced by pimps and johns to carry out this extreme abuse of the animals. Also consider the message it sends to boys and men about all females, since this one gender is portrayed as the ones who perform such a despicable act.

Most crush videos originate in the United States, are commonly available through the Internet (over 2000 titles) and are distributed almost exclusively for sale in interstate or foreign commerce for up to $300.00 each.

More recently, Shoe City Company has pledged to introduce an internal review process to ensure that all external messaging is aligned to Shoe City’s value system and ethos.
Let’s hope this internal review is successful and that they consider hiring a new advertisement group.