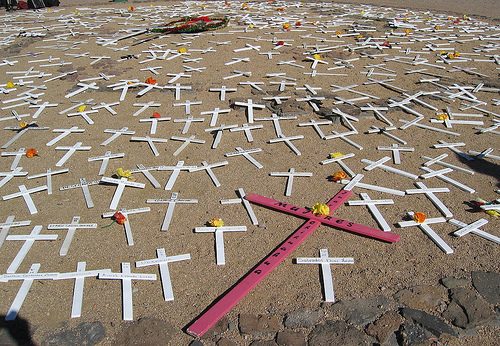 During the last decade, Guatemala has experienced an epidemic of woman-killing. The bodies are everywhere: turning up in ditches on the side of the road, on the curbs of city streets, and in wooded ravines, often with signs of mutilation and rape. Over 5,000 women have been murdered in the tiny country during the past decade, giving it one of the highest female mortality rates in the world, according to the Central American Council of Human Rights Ombudsmen (CCPDH), and it has been labeled the most dangerous place to be a woman in all of Latin America.

Whatâ€™s more, a jaw-dropping 98 percent of these killings receive no legal action whatsoever. The phenomenon is uniquely toxic, and surprisingly, the Guatemalan government has responded in a unique fashion: by passing a law to prohibit and prosecute the crime of femicide.

Femicide. What is that? The term has a relatively obscure origin, and it has made an unlikely journey into the political bloodstream of Latin America. It was popularized in 1976 by Diana Russell, a 37-year-old professor at Mills College in Oakland, California, who heard the term when a friend told her that Carol Orlock, an American feminist, was working on a book about it. Orlockâ€™s book was never published, but, by using the term in her own work, Russell was able to give it life. That year, Russell was heading up a five-day global feminist speakout in Brussels called the International Tribunal on Crimes Against Women, which brought together 2,000 feminists from over 40 different countries at the cityâ€™s Palais des CongrÃ¨s, in order to denounce violence against women and mobilize those present to fight it. In an opening address, Simone de Beauvoir called the event â€œthe start of a radical decolonization of women,â€ but it quickly dissolved into an organizational disaster. Russell, a co-organizer of the Tribunal, had helped devise a carefully scripted schedule for the event. But soon, radical activists were storming the stage one after another in an improvised free-for-fall, which culminated in the moderator turning off the microphone and the planning committee abandoning the platform. By the end of the second day, the program had been discarded entirely, and, on the third day, the proceedings were temporarily interrupted by a bomb threat.

Taking her own turn on the stage, Russell read off the names of 17 women who had been murdered in the San Francisco Bay area and described the macabre circumstances of their deaths. After reading off the last victim, she gave a brief eulogy: â€œThe names of those who I have read out to you today will soon be obliterated. No demonstrations have accompanied them to the grave, no protests rocked the city, no leaflets were passed out, and no committees were formed. But today we have remembered them. And tomorrow we must act to stop femicide!â€

Until recently, that chaotic moment was the termâ€™s most dramatic appearance on the world stage. Russell returned to California, where she attempted to flesh out her idea in several academic papers and an anthology called Femicide: The Politics of Woman Killing. By using the term â€œfemicide,â€ she intended to highlight and stigmatize a specific type of crime. Russell hoped to promote the idea that the killing of womenâ€”whether perpetrated explicitly because victims are female or simply because women as a class can be uniquely vulnerable to aggravated, lethal attacks by menâ€”is a distinctive problem that must be stigmatized and combated. Dubbing the phenomenon with a unique name, she believed, would be the first step toward reducing the killing of women worldwide.

The idea did not catch on. After debuting femicide at the Tribunal in Brussels, Russell began using the word in her work, but its impact was minimal. â€œI did various things,â€ she tells me. â€œThe books, organizing a speakout, making speeches around the country. Even right after talking about it in a keynote speech, nobody mentioned it, even though I stressed it. I really sort of despaired.â€

Then, something surprising happened. Part of the problem with â€œfemicideâ€ was that it was difficult to explain in a way that the public could easily comprehend. While horrendous killings of women, motivated by misogyny, certainly occurred around the world, the concept was still slightly amorphous. The 1989 â€œMontreal Massacre,â€ a mass shooting of women at a technical school in Canada, for example, wasnâ€™t necessarily identical to killings resulting from domestic violence, sex trafficking, or the deaths of women in sub-Saharan Africa or the Middle East. Nevertheless, it turned out there were societies that understood instinctively what Russell was referring to: Certain regions of Latin America had been torn apart by epidemics of woman-killing far out of proportion with the deaths of women produced by internal civil war or drug violence. For years, activists in those areas had been battling against their own crime with no name, and when Russellâ€™s word made it into Spanish, they embraced her.

In 2004, Marcela Lagarde, a prominent Mexican politician and feminist, invited Russell to give a talk at a conference in the border city of Ciudad JuÃ¡rez after reading her anthology. Lagarde considered â€œfemicideâ€ an apt description for the mysterious, macabre mass killings of women that had been going on in JuÃ¡rez since 1993â€”a phenomenon which had attracted a great deal of international attention, inspiring numerous books and films. Lagarde wanted to turn Russellâ€™s idea into a political crusade. She chaired a commission on femicide in the Mexican congress, and promoted the term at events throughout Latin America.

The idea soon spread to Guatemala. Activists there, in dialogue with their Mexican counterparts, grew enthusiastic about using the term to combat murders in their own country, which had become a kind of Juarez writ large. The countryâ€™s 36-year civil war, in which more than 200,000 people were killed or disappeared, had ended in 1996. But the settlement between guerrilla groups and the government did not wipe away the devastatingly casual attitudes that had developed toward human life, and it left the citizenry prey to widespread corruption, judicial impunity, drug trafficking, maras (or gangs), and a seemingly ineradicable culture of violence. Since 2000, the most distinctive feature of this situation had become the gruesome killings of women.

Thus, the idea of â€œfemicideâ€ struck a chord. In 2008, prompted by a domestic campaign and international pressure, the Guatemalan congress passed Decree-22, the Law Against Femicide and Other Forms of Violence Against Women, which listed in 28 articles a number of prosecutable types of violence against women, including economic and psychological violence, and declared the goal of guaranteeing â€œthe life, liberty, integrity, dignity, protection, and equality of all women before the law.â€ Guatemala also set up the Office of the Presidential Commission Against Femicide, tasked with implementing the law and creating an anti-femicide unit in the national police, launching anti-femicide publicity campaigns, and standing up public prosecutorial offices that specialize in violence against women.

So femicide, an obscure and rather academic concept developed by a professor in Oakland, had been pressed into service by a nation at war with its own cultural demons. But itâ€™s worth asking: Does a new term have the power to bring safety to Guatemalan women? On the one hand, the word has certainly affected Guatemalan culture, becoming a part of the national lexicon and entering the speech of everyday people as well as sensationalist tabloids like Nuestro Diario. And there has been a significant increase in reports of violence against women brought to the policeâ€”27,000 in the first six months of 2010, according to Alba Trejo, of Guatemalaâ€™s Presidential Commission Against Femicide. Whatâ€™s more, the word has been a useful tool for people trying to roll back Guatemalaâ€™s culture of impunity, providing publicity and legitimacy to anti-femicide groups like the Survivorâ€™s Foundation, which have found it easier to send offenders to jail. It has also increased punishments, helping to secure the previously unimaginable sentences of 163 years for each of the men who participated in a high-profile set of murders of three young girls by machete.

On the other hand, Decree-22 is a flawed tool. As it currently stands, Trejo says, many of the decreeâ€™s sentences are less severe than the already existing national penal code, and even if the law has changed the atmosphere surrounding crimes against women, few offenders are actually convicted for â€œfemicide.â€ Indeed, implementation faces terrible obstacles. An aura of indifference still pervades the Guatemalan justice system, from the beat cop to the high judge. There are only three public prosecutor offices in the whole country to deal with these cases, according to Trejo, and, culturally, many judges sympathize with men who beat their wives, believing it is within their rights as husbands. So, in assessing the impact of the Law Against Femicide, one must ask: Will forensic specialists stop botching investigations and get proper DNA testing done? Will women found dead wearing, say, a skirt or a belly-button ring, receive true police work, instead of being written off as dead prostitutes unworthy of an investigation? Will judges stop sympathizing with men who use violence to discipline their wives? And is the government capable of providing the resources to make good on Decree-22â€™s commitment to Guatemalan women?

Ultimately, the success of Russellâ€™s project will depend on political will. This is a question facing not only Guatemala, but all countries where a culture of woman-killing has taken rootâ€”an alarming proportion of the planet. â€œFemicideâ€ could be a term that changes the way people think, and act, regarding gender-based violence worldwide, or it could simply remain an interesting footnote in the annals of linguistic and legal history.