Take Your Foot off My Neck 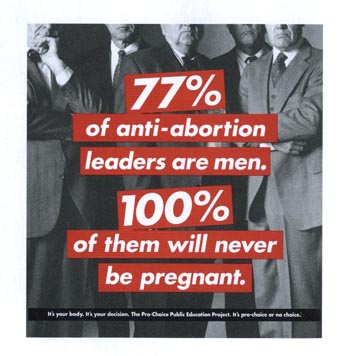 By Charlotte Taft from Reality Check

I am furious. As the Director of the Abortion Care Network, a non-profit organization that supports independent abortion providers and challenges stigma, I know more than I want to about the recent attacks on womenâ€™s reproductive choices. The Congress of the United States should be ashamed for passing HR 3, which would impose permanent bans on federal funding of abortion. HR 3 will also make it nearly impossible to obtain healthcare insurance for abortion care and even some forms of contraception.

The glee with which male politicians are willing to strip women of their most basic rights is staggering. It is devastating to read the dozens of e-mails that come to me every day detailing the myriad ways in which womenâ€™s lives, well-being, and health are being savagely attacked in Congress and in state legislatures across the country. And it is crushing to recognize that so many smart, caring women will spend their time, precious energy, and scarce resources begging men to please, please harm women just a little bit less. We want to believe that they do not hate usâ€”that they respect us as full human beings, and yet every day the evidence mounts that this is not the case. I realize that Iâ€™m not supposed to say that. Iâ€™m not even supposed to notice.

In 1837, Sarah Moore Grimke an early feminist who lived at a time when women had no right to own property or to vote, or to have custody of their children, or even to speak in public said, â€œI ask no favors for my sexâ€¦All I ask is that our brethren take their feet from off our necksâ€¦â€

Almost two centuries later the legislation, the pontificating about morality, the pretend defense of taxpayer dollars, is all a disguised symptom of the continued deep seated bedrock belief of Patriarchy that women are evil and dangerous and that their power must be contained. Patriarchy is a worldview that enshrines the rule of the fathersâ€”the idea that there is a God-given superiority of men, which gives them the license to control and use women and everything on the planet for their own purposes. I understand that some women find their value and safety in identifying with those in command, but my heart aches when I see women joining the club to hate women and control their choices. Some days I think there has been a time warp and I have woken up an old world with the view that there are good women and bad women. Good women are the ones within a manâ€™s racial, religious, and class group who behave themselves as expected. The bad womenâ€”anyone of a different race or class, or who doesnâ€™t know her place– is subject to whatever treatment the men can get away with.

Just as Patriarchy isnâ€™t only for men, Feminism isnâ€™t only for or about women. Feminism is a worldview that adopts the radical idea that there is intrinsic value in both women and men. In the Feminist view, a just society recognizes the full humanity of both, and includes policies that enable both to live as full human beings. Allowing women to fulfill their potential means at minimum creating reproductive justice, excellent affordable childcare, the ability to keep themselves and their children safe from violence or sexual predation, and opportunities to develop their full potential (social characteristics that also benefit men).

In the nineteen seventies women had a brief and powerful experience of transforming the system in which we live. Millions of women of all races, classes and cultures began to question assumptions about their place in society. We learned about the women who had worked for social justice before usâ€”we pressed for changes in laws and federal priorities. Women shared stories of our lives, our hopes and our dreams. Many recognized that feminism didnâ€™t mean having a larger piece of a scarce thing called â€˜powerâ€™â€”but experiencing the power within usâ€”the power to create a world in which all are honored and included. But something happened that dissipated that extraordinary energy. In 1985 Ellen Goodman wrote a column in the Boston Globe:

â€œSisterhood May Be Losing Out to Equality: â€¦The questionâ€”What has happened to that always tenuous bond called sisterhood?â€¦There was a time, and not that long ago, when women began to focus on what they had in common, what they had suffered in common. There was a sense of community created out of this fresh awarenessâ€”out of anger, too, and a belief in change. A certain population of women thought of themselves as women first, and found some self-conscious assurance in the slogan, â€œSisterhood is powerful.â€

Today much of that energy has been dispelled in the best possible way: by success. The head of steam from women has been dissipated by new opportunitiesâ€¦â€

Can it be that the incredible momentum of feminism was derailed at least in part by opportunities?–by the illusion of equality? Whatever the causes of the derailment, our work was by no means finished, and our need for Sisterhood was by no means done. The Equal Rights Amendmentâ€”the most basic call for equality for women– had been defeated; the 1971 Comprehensive Child Development Act which would have provided child care for all women had been vetoed by Richard Nixon; rape and domestic violence were still endemic in the society; there was no equality in political representation. As the feminist movement was declared to be over, we were encouraged once again to view our successes and failures as our personal problems and not as associated with continuing systemic gender discrimination. With each new Presidentâ€”each new Congress, we assess the rise and fall of our freedom and our well-beingâ€”like investors watching the stock market go up and downâ€”helpless to do anything about it. Today we watch as men who lay claim to morality deny fundamental healthcare and fundamental human choices to the poorest women in our society (who are of course the mothers of the poorest children in our society).

But it is not only the poorest most vulnerable women who are attacked today. As these legislators make it nearly impossible for women to secure health insurance coverage for abortion and possibly even birth control, they now tread on the imagined â€˜rightsâ€™ of women who thought we had actually earned respectâ€”who thought we were protected, entitledâ€”white womenâ€”middle class women–women with husbands–women with good jobs and good familiesâ€”women who are part of the majority culture. As long as any women are vulnerable, all women are vulnerable.

I am heartened that there are good men who stand with usâ€”who recognize that creating a partnership of masculine and feminine principles is desperately needed for the survival of the species. But they are far too few, and we donâ€™t hear their voices from the seats of power.

For centuries women have done everything we can think of to be included, accepted, respected, not harmed. There have obviously been many changes in womenâ€™s lives and people may argue that feminism is no longer neededâ€”itâ€™s passÃ©. But even in our modern day when women in the U.S. have the right to vote and to be part of the full life of the nation, we are second-class citizens. And competing for a piece of this pie is like â€˜fightingâ€™ for peace. You cannot get there from here.

I know that women who point this out are likely to be dismissed as â€˜man hatersâ€™. So dismiss me if you canâ€™t handle the painful truth. If you think I am overstating the case, letâ€™s just look at one tiny awful piece of evidence. In the United States an estimated 250,000 rapes of women are committed by men every yearâ€”a woman is raped every 2 minutes. Can we deal with the almost unbearable reality that we have not been able to stop men from raping women for one day in one city in one country on the planet? Letâ€™s face the fact that after 5,000 years, our brethren will not, in fact, remove their feet from off our necks.

Those in power do not give it up. Way back in 1987, Sonia Johnson wrote about this in Going Out of Our Minds: “Roe vs. Wade has won another victory for patriarchy: it has kept women focused upon and deeply emotionally invested in the system. Since the moment the decision was handed down, men have forced feminists in dozens of states to spend among them millions of hours trying desperately not to lose it piece by piece. Now, regardless of which party is in power, the groundwork has been laid:…women are being subsumed into and consumed by the state function of motherhood, and their hopes for help are bound firmly once more to the state. The Supreme Court will continue, now that the decision has accomplished its purposes, to gut Roe vs. Wade, perhaps retaining as much as is necessary to keep feminists still trusting the system, still under control. …When will we learn that, since they depend for their very existence upon keeping us colonized, we cannot depend on patriarchal institutions to give us self rule.â€

So as we watch our human rightsâ€”our rights to make the most personal of all choicesâ€”stripped away bit by bit, we must resist the pressure to narrow our concerns to single issues. We must redefine Reproductive Justice to include every aspect of womenâ€™s reproductive lives including abortion, adoption, parenting, contraception, childcare, miscarriage support, childbirth education and services, and infertility. Women must reach out to each other again— reminding ourselves and each other of our intrinsic value. This the most risky and uncharted path to the transformation of power that was begun by our foremothers so many years ago—and is, perhaps, the next step to true human civilization.