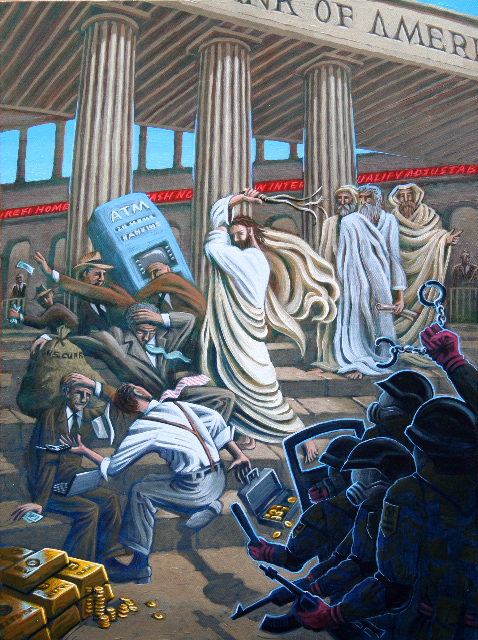 These are remarks Chris Hedges made in Union Square in New York City during a protest outside a branch office of the Bank of America.

We stand today before the gates of one of our temples of finance. It is a temple where greed and profit are the highest good, where self-worth is determined by the ability to amass wealth and power at the expense of others, where laws are manipulated, rewritten and broken, where the endless treadmill of consumption defines human progress, where fraud and crimes are the tools of business.

The two most destructive forces of human natureâ€”greed and envyâ€”drive the financiers, the bankers, the corporate mandarins and the leaders of our two major political parties, all of whom profit from this system. They place themselves at the center of creation. They disdain or ignore the cries of those below them. They take from us our rights, our dignity and thwart our capacity for resistance. They seek to make us prisoners in our own land. They view human beings and the natural world as mere commodities to exploit until exhaustion or collapse. Human suffering, wars, climate change, poverty, it is all the price of business. Nothing is sacred. The Lord of Profit is the Lord of Death.

Fyodor Dostoyevsky in â€œCrime and Punishmentâ€ understood the radical evil behind the human yearning not to be ordinary but to be extraordinary, the desire that allows men and women to serve systems of self-glorification and naked greed. Raskolnikov in the novel believesâ€”like those in this templeâ€”that humankind can be divided into two groups. The first is composed of ordinary people. These ordinary people are meek and submissive. They do little more than reproduce other human beings in their own likeness, grow old and die. And Raskolnikov is dismissive of these lesser forms of human life.

The second group, he believes, is extraordinary. These are, according to Raskolnikov, the Napoleons of the world, those who flout law and custom, those who shred conventions and traditions to create a finer, more glorious future. Raskolnikov argues that, although we live in the world, we can free ourselves from the consequences of living with others, consequences that will not always be in our favor. The Raskolnikovs of the world place unbridled and total faith in the human intellect. They disdain the attributes of compassion, empathy, beauty, justice and truth. And this demented vision of human existence leads Raskolnikov to murder a pawnbroker and steal her money.

The priests in these corporate temples, in the name of profit, kill with even more ruthlessness, finesse and cunning than Raskolnikov. Corporations let 50,000 people die last year because they could not pay them for proper medical care. They have killed hundreds of thousands of Iraqis and Afghanis, Palestinians and Pakistanis, and gleefully watched as the stock price of weapons contractors quadrupled. They have turned cancer into an epidemic in the coal fields of West Virginia where families breathe polluted air, drink poisoned water and watch the Appalachian Mountains blasted into a desolate wasteland while coal companies can make billions. And after looting the U.S. treasury these corporations demand, in the name of austerity, that we abolish food programs for children, heating assistance and medical care for our elderly, and good public education. They demand that we tolerate a permanent underclass that will leave one in six workers without jobs, that condemns tens of millions of Americans to poverty and tosses our mentally ill onto heating grates. Those without power, those whom these corporations deem to be ordinary, are cast aside like human refuse. It is what the god of the market demands.

When Dante enters the â€œcity of woesâ€ in the Inferno he hears the cries of â€œthose whose lives earned neither honor nor bad fame,â€ those rejected by Heaven and Hell, those who dedicated their lives solely to the pursuit of happiness. These are all the â€œgoodâ€ people, the ones who never made a fuss, who filled their lives with vain and empty pursuits, harmless perhaps, to amuse themselves, who never took a stand for anything, never risked anything, who went along. They never looked hard at their lives, never felt the need, never wanted to look.

Those who chase the glittering rainbows of the consumer society, who buy into the perverted ideology of consumer culture, become, as Dante knew, moral cowards. They are indoctrinated by our corporate systems of information and remain passive as our legislative, executive and judicial branches of governmentâ€”tools of the corporate stateâ€”strip us of the capacity to resist. Democrat or Republican. Liberal or conservative. It makes no difference. Barack Obama serves corporate interests as assiduously as did George W. Bush. And to place our faith in any party or established institution as a mechanism for reform is to be entranced by the celluloid shadows on the wall of Platoâ€™s cave.

We must defy the cant of consumer culture and recover the primacy in our lives of mercy and justice. And this requires courage, not just physical courage but the harder moral courage of listening to our conscience. If we are to save our country, and our planet, we must turn from exalting the self, to subsuming of the self for our neighbor. Self-sacrifice defies the sickness of corporate ideology. Self-sacrifice mocks opportunities for advancement, money and power. Self-sacrifice smashes the idols of greed and envy. Self-sacrifice demands that we rise up against the abuse, injury and injustice forced upon us by the mandarins of corporate power. There is a profound truth in the biblical admonition â€œHe who loves his life will lose it.â€

The bankers and hedge fund managers, the corporate and governmental elites, are the modern version of the misguided Israelites who prostrated themselves before the golden calf. The sparkle of wealth glitters before them, spurring them faster and faster on the treadmill towards destruction. And they seek to make us worship at their altar. As long as greed inspires us, greed keeps us complicit and silent. But once we defy the religion of unfettered capitalism, once we demand that a society serve the needs of citizens and the ecosystem that sustains life, rather than the needs of the marketplace, once we learn to speak with a new humility and live with a new simplicity, once we love our neighbor as ourself, we break our chains and make hope visible.

Chris Hedges is a senior fellow at The Nation Institute and a weekly columnist for Truthdig. His latest books are â€œDeath of the Liberal Classâ€ and â€œThe World as It Is: Dispatches on the Myth of Human Progress.â€