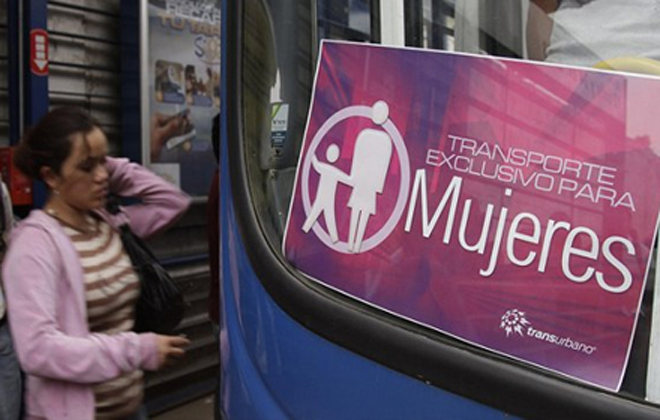 “We are all safer here; it’s great because this way there are no men groping you,” Jaqueline Escobar, a sales executive, told IPS on a bus that is exclusively for women, a service against sexual harassment that is being tried out in the Guatemalan capital.

Guatemala City’s mass transit system, Transurbano, launched a pilot programme on Jun. 14 with dozens of buses identified with signs reading “For Women Only” and pink ribbons, which run between the city centre and neighbourhoods to the north and south.

In its first two weeks of operations, the new system has won over a large number of Guatemalan women. “It’s a great idea; they should expand it beyond rush hour, make it available all day long, so all women can feel safe,” Escobar added.

“Yes, obviously it’s less risky for us,” Alejandra Zabala, an administrative assistant who rides the Transurbano to commute to her job on the south side of the city, told IPS.

Sexual harassment has become a daily challenge for Guatemalan women who ride the bus.

More than one-third of the 1,500 complaints received annually by the Association of Urban and Suburban Transport Users of abuses against passengers involve sexual harassment of girls and women.

“Men grope them, treat them rudely, and rub up against them from behind,” Edgard Guerra, president of the non-governmental association of bus system users and one of the driving forces behind the initiative, commented to IPS. “There have even been cases of rape. This is our concern, because our sisters, daughters and mothers ride the buses.”

Spearheading the initiative was right-wing opposition congresswoman Zury RÃ­os, who asked the owners of buses to create women-only spaces, to keep them safe from harassment and aggression.

“It’s been a success. I’m really happy that women feel safer and that with this decision, their human rights have begun to be respected,” said the legislator, who is the daughter of former dictator EfraÃ­n RÃ­os Montt (1982-1983).

Congresswoman RÃ­os, who is known for taking up women’s causes, said the Guatemala City system is based on the Mexico City model. She added that the idea is to also provide a women-only taxi service, with women drivers, similar to a system that is operating in the Mexican capital.

But sexual harassment is only one of the problems faced on buses in Guatemala. Drivers are frequent targets of robberies and extortion. At least 128 bus drivers were killed in this Central American country in 2010, many of them for refusing to make “protection” payments to organised crime groups, or during robberies, according to the Mutual Support Group (GAM), a local human rights organisation.

Passengers are also targeted in robberies on buses, which have become routine.

The United Nations Development Programme (UNDP) reports that Guatemala is one of the most violent countries in the world, with a murder rate of 52 per 100,000 people, compared to the global average of nine per 100,000.

From 2006 to May 2011, a total of 1,201 people were killed on buses, including drivers, conductors, passengers, security guards and criminals, according to the ombudsperson’s office.

In response to the growing violence, the government and the business community joined together to put the Transurbano system into operation in July 2010. The system was designed to improve safety by upgrading the fleet of vehicles, having passengers use prepaid cards, installing cameras, and posting security guards on buses.

So far, only 350 of the total fleet of 3,150 buses in Guatemala City have been replaced, and only new vehicles have been designated as women-only buses.

“I feel safer here,” VerÃ³nica Ortega, holding her two-year-old son, told IPS as she rode home on one of the women-only buses.

“The problem is that off the bus, harassment is still an issue,” Ana MarÃ­a CofiÃ±o, with the La Cuerda feminist collective, told IPS, describing the buses as a “palliative” measure.

“Specific actions like this are taken, but violence in other areas like the workplace or the streets, or the fact that women are at risk of being raped at any time, are not addressed,” she complained.

CofiÃ±o said the Guatemalan state has the obligation to guarantee that women have the same access to opportunities as men, and to carry out awareness-raising campaigns on respect for women. “If the authorities did this, we would believe there was a more serious intention of bringing about change,” she added.

Ana Silvia MonzÃ³n at the Latin American Faculty of Social Sciences (FLACSO) told IPS that the initiative makes sense as long as women continue to be harassed on public transport.

“I hope it’s only temporary and that men’s behaviour will improve, but for that to happen, other measures are needed as well,” the expert added.

She underscored the importance of the 2004-2014 national plan for the prevention of intra-family violence and violence against women, which entails actions in different areas, such as education, health and the justice system.

As part of that plan, in 2008 Congress passed a law against “femicide” â€“ gender-related murders â€“ in this country of 14 million people, where 5,200 women were killed between 2000 and 2010 as a result of gender violence, according to police statistics.

Evelyn Morales, with Tierra Viva, a women’s group based in Guatemala City, told IPS that it will take a major effort to curb harassment and violence against women. But the women-only buses “are a positive step, because most women experience being groped, harassed and sexually violated on urban and suburban buses,” she said.

But not everyone is happy about the measure. “There aren’t enough buses, and now half-empty buses carrying only women will go by,” complained VÃ­ctor GuzmÃ¡n, a factory employee.

The women only buses were big news, but their future is uncertain. Transurbano spokesman Sergio VÃ¡squez told IPS that it is a pilot plan that will be assessed.

After the evaluation, the service could be expanded or replaced by women-only spaces on buses shared by women and men, he explained. Time will tell, but in the meantime, women are enjoying the new service.
From: http://ipsnews.net/news.asp?idnews=56227